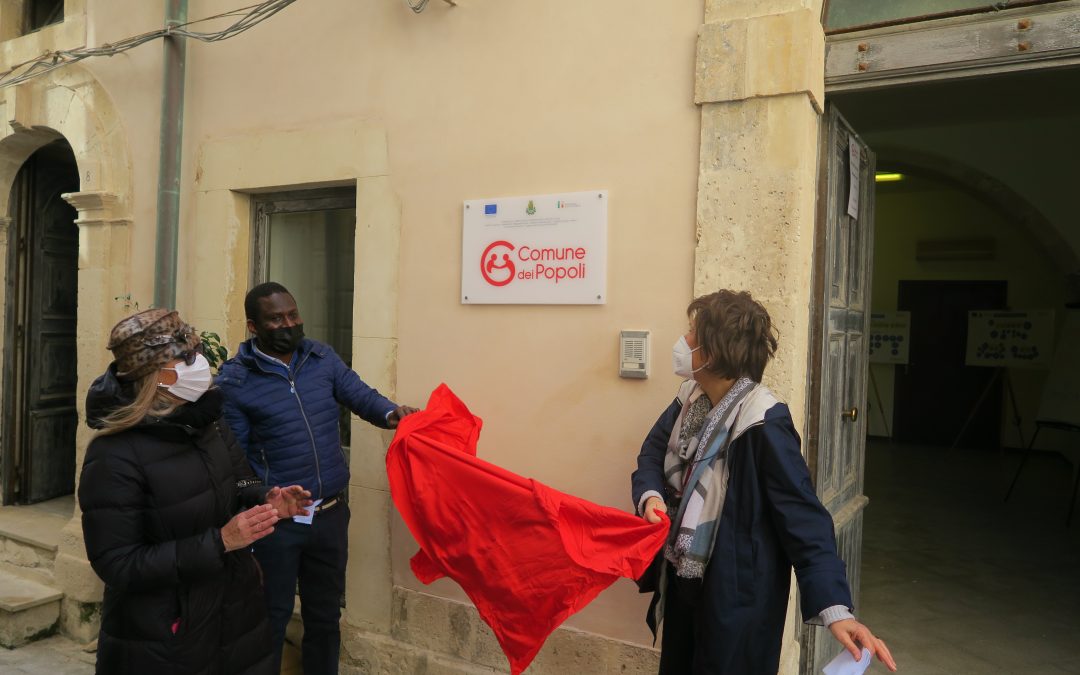 Comune dei Popoli officially opened this morning. A new direction in the relationship between public bodies and foreign citizens

This morning the office of the Comune dei Popoli  started operating. The intend is to introduce a new course in the relationship between public administration and foreign citizens who want to use public services. The office is located in Casa Minniti, in the district of Giudecca. The premises were provided by the Municipality of Syracuse in its function as head of a FAMI project (Asylum, Migration and Integration Fund 2014-2020) co-financed by the European Union, through the Ministry of the Interior.
The office was inaugurated by the Councillor for Social Inclusion and the Right for Housing, Rita Gentile, the manager of the Municipality’s Social Services, Loredana Carrara, and the cultural mediator Amadou Ly, who is part of the Comune dei Popoli office team; also present were representatives of the project partners, all with long-standing experience in social work and innovation, including: AccoglieRete, Impact Hub Siracusa, Arci Siracusa, Oxfam Italia Intercultura, CPIA Siracusa “Alberto Manzi” and Fondazione italiana di solidarietà Marista Champagnat. Mayor Francesco Italia was absent due to other work commitments.

“We are proud of this project,” said Councillor Rita Gentile, “which was fully supported by Mayor Italia. We will carry out training activities to allow public services provided at the front office to be efficient and effective for migrants and foreign citizen. There is an awareness that public operators often lack tools and knowledge to relate in an effective way with citizens and this hinders the exchange of information, creating inefficiencies and discomfort for users.”

Loredana Carrara highlighted “the importance of orientation towards the use of services but also the fact that public bodies must be ready for this new user group. Now,” she added, “we have to work to involve all the other offices in the area in this activity, starting with the health services”. In addition to this key function, the desk also aims at providing support to foreign citizens in meeting their needs and becoming a training, documentation and intercultural promotion center.

According to Amadou Ly, ‘the real innovation of Comune dei Popoli is that it is meant for public service operators. This will help,” concluded the cultural mediator, “to ensure equal dignity for all and develop foreign citizens’ sense of participation and a perception of belonging to the city.”