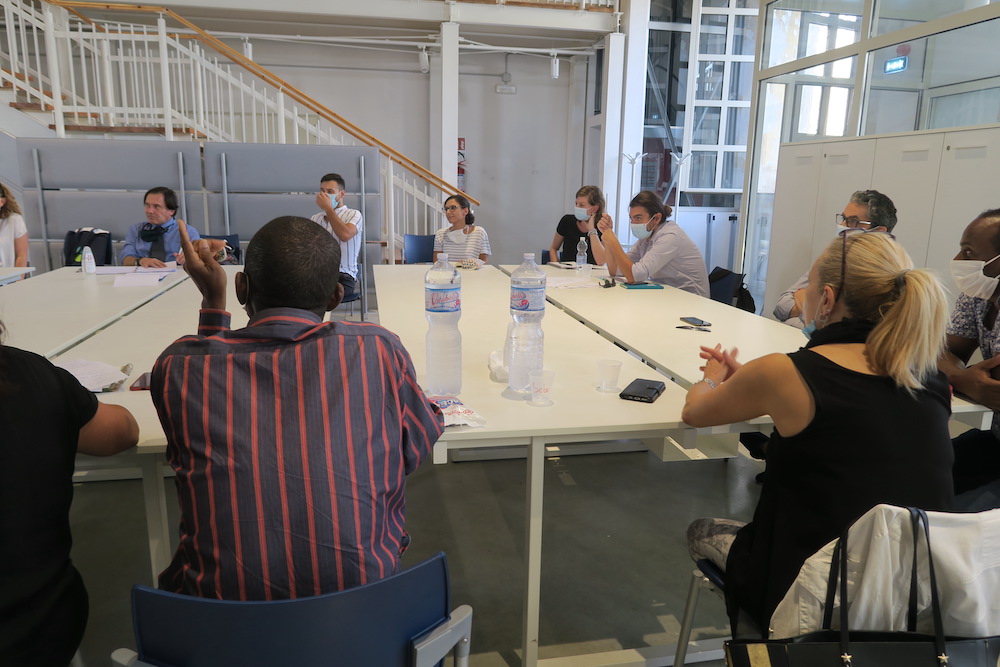 One of the first activities of the project Comune dei Popoli, was to analyse the needs, difficulties and frustrations of public operators, teaching staff and ATA and migrants of the Syracuse territory during the phases of the inclusion paths of foreign citizens. The aim was to stimulate ideas and propose useful tools, in order to activate the development of participatory processes for the implementation of an orientation desk to support operators and foreign citizens; to deepen the knowledge between the parties in order to improve relations and lay the foundations for a more successful collaboration. In order to realize this collective process, the project started from a phase of mapping the services of the Municipality of Syracuse and other territorial institutions, and from a phase of interviews with public operators, managers of public offices, heads of third sector institutions and migrants, in order to extract three topics, meant to be the subject of three meetings, which took place on 6th, 13th and 20th of October 2020, in presence at the Urban Center of Syracuse and in digital mode on ZOOM.

WORDS: VEHICLES IN CERCLE BETWEEN PEOPLE

The meeting was held on October, 13th, 2020 at the Urban Center of Syracuse and was attended by 12 participants including the Team of the office Comune dei Popoli, some representatives of migrant communities, public and private institutions and two facilitators of the Impact Hub Syracuse team. They reflected on the weight that words can have in the emotionality and perception of those who listen to us, when words may seem offensive to some people and why you feel upset and shaken. It emerged that often, in addition to the meaning of the words themselves, the way they are pronounced can also have an impact on our interlocutor, and each of the participants shared with the group stories of first-person experiences of verbal aggression. Soliciting solutions capable of a better understanding of: the human being, emotions and the interpersonal relations between operators and users, was the common meeting point.

The discussion then came to the sharing of experiences lived as moments of “cultural distance”. The distances that have been highlighted during the debate seem to be generated more by non-knowledge than by non-understanding of each other’s culture. Thus emerged the common need to undertake training in cultural understanding, in order to know, understand and transform the differences between cultures into a resource. Among the answers to face these difficulties the suggestion was to attend training courses able to provide tools to learn how to manage negative emotions, to understand cultural differences, and the need of a greater presence of linguistic and cultural mediators.